One year ago, Hurricane Sandy lashed over New York and the surrounding areas. Thousands of people were left homeless, without food and clothes. The state of national emergency was declared in both New York and New Jersey, but aid never comes fast enough and in the right amounts to the needy. Fortunately, here it’s when people with great heart, a spirit of initiative and the ability to mobilize resources move in. Among them, some Albanian-Americans were particularly distinguished.

The following article tells the story of Rick Elezi, whose company R.E.M. Residential organized its own operation to help New Yorkers in need. The article was published in Illyria and in The New York Daily News (the supplement on Albania’s 100th anniversary on November 28, 2012).

We thought it would be great to bring it again to our readers online, from around the world, who may have missed last year when our website was under construction.
(Ruben Avxhiu)

Hurricane Sandy’s cruel hand of destruction was felt in many communities along the East Coast.  Staten Island, one of the hardest hit areas in New York that received a delayed responsiveness from authorities, has started to rebuild itself, piece by piece, with the help of many grassroots initiatives and community volunteers and donations.

As New Yorkers arose together to lend a hand to those affected by Sandy, R.E.M. Residential, a  Property Management firm located in Manhattan’s Union Square neighborhood, joined the cause in hope to make even the slightest difference in the midst of the immense devastation that fills the air of SI.

Rick Elezi, the company’s President, whose family emigrated from Albania when he was just two, like many of us, spent most of the days during the super-storm glued to the television watching endless tear-jerking pictures of the annihilation of many homes and the stunned faces of everyone touched by this tragedy. “It was then”, he says, “that I thought to myself, R.E.M. will do something to help.”

R.E.M.’s offices went a week without electricity and as soon the power came back on, on Saturday, the employees got together and while catching up on lost work, they immediately began to reach out to their large network of vendors, contractors, and friends in the industry. Venila, an intern with R.E.M., was put in charge by Rick to plan their relief efforts. While Rick started rallying all of his contacts in hope to get as many donations as possible, Venila with the help of Aida, an employee at R.E.M., started their week and a half research journey to make their   “UNITE-HELP-GIVE” initiative as constructive as possible.

Fortunately, due to their extensive reach, they were able to raise over $10,000 in monetary donations, including multiple donations of various goods and supplies. Donors ranged from vendors, contractors, industry associates, employees and friends and family. The monetary contributions were used to purchase a tremendous amount of goods & supplies such as cleaning and construction supplies, nonperishable food items, personal items, baby food and baby supplies, pet supplies, school supplies, first aid items, and toiletries, for which each donor received applicable receipts. Warm blankets, coats and warm winter clothing were also donated as well as a few baby playpens, cribs, and swings. A hot pink-breast-awareness-truck was also generously donated to R.E.M. by Padded Wagon, fortunately assisting in the delivery of a large amount of goods.

Many of the Superintendents, workers, industry friends and family came out to volunteer their time organizing and separating all the supplies according to drop-off locations, and finally, as the PINK truck pulled in, they uploaded the goods in order of locations. About twenty-five of them went along to SI, on Friday, November 16, 2012, to help with the distribution of the supplies to the devastated communities.

The research of the many devastated communities waved their path, leading them to multiple locations in Staten Island in desperate need of help and donations.

Ariana’s Grand, a seriously damaged catering hall at 192 Ebbitts Street, was their first stop. Owners, Marie & Frank Dimattina converted the hall into a shelter, and a designated drop-off point for hot ready to eat food, cleaning supplies and first aid supplies. As they entered SI, the heartbreaking pictures played over and over again on TV, suddenly came to life, creating a crisp epiphany, only to settle the harsh reality even clearer.

As they approached the catering hall, they started to feel the devastation, but it was quickly followed by a proud feeling of being part of this state, this country, as the picture of Ariana’s Grand surrounded by FEMA workers, volunteers and tents full of donations, became evident. R.E.M.’s team pulled in and was warmly received by Cookie, the restaurants’ contact and FEMA workers who joined to help them unload the donations that included purchased and donated hot food from Garden of Eden, a local NYC restaurant, and various cleaning, construction, and first aid supplies, personal items and toiletries.

They were also delighted to be able to donate school supplies such as composition notebooks, binders, loose-leaf fillers, subject dividers, rulers, markers, scissors, pens, and backpacks, to Project Backpack, a teacher’s non-for-profit group, reaching out to help the devastated communities. Here they distribute backpacks filled with supplies to NYC public schools trying to get their kids back to school.

Casa Belvedere, Staten Island’s Italian Cultural Institution at 77 Howard Ave was their third stop. This location was collecting donations on behalf of Congressman Michael Grimm and Borough President James P. Molinaro. The institution would then bring these items to SI’s largest distribution center, a VFW – Veterans of Foreign Wars- post, to be given out directly to the affected victims, in carefully packed packages.

Being overwhelmed with the enormity of their donations, as they opened the Padded Wagon truck and 25 people pounced on the side doors ready to form a train, the institution’s operative kindly asked us to take the items directly to the Distribution Center. This was as a result of them not having space or the manpower to get these supplies there for over a week.

Approaching the VFW post here R.E.M.’s team was so surprised to hear that this Distribution Center had such a large reach to the affected community, where over 25,000 people, Sandy victims, and workers alike, came here to receive supplies that they needed. The post’s organization and order made then place look like an implacable supermarket. 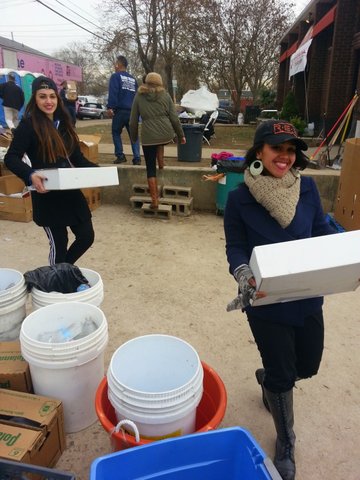 Concluding with their last stop, the empty PINK Padded Wagon truck started to make its way back to Manhattan. On their way back the activities of the day began sinking in. The team realized that a group of people as diverse as their country and their state, with nationalities including many Albanians united with a mix of Croatians, Colombians, Dominicans, Italians, Turks and Americans, all came together as one, united as the United States of America,  in an effort to “UNITE-HELP-&-GIVE”.

Rick and Venila finally arranged a dinner at NYC’s Italian restaurant, ‘Novella’, as a thank you from R.E.M. to all the volunteers and donors that contributed to the Sandy Relief Initiative. As they enjoyed the carefully made Italian specialties and the restaurant’s warm and inviting atmosphere, they hoped that their efforts had made a small difference in Staten Island’s colossal rebuilding task. They hoped to have left even the smallest mark on the community’s recovery effort, assisting those who courageously help those in need, every day. The night ended with the team’s gratefulness to all that donated their time and heart into this cause, as they were thrilled to have had the opportunity to supply the needy with even a day worth’s of a hot meal or a helping a child getting back to school with a backpack filled with the necessary school supplies. The night ended with a sigh and a smile on everyone’s face. 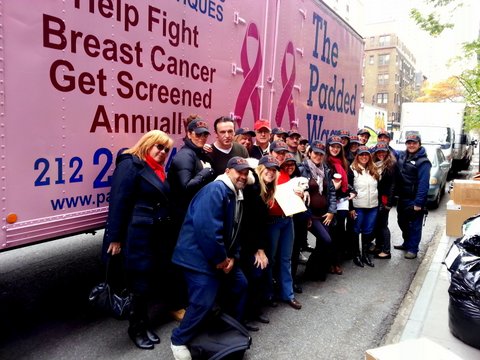