Talk about a family affair.

If you count – as R.E.M. Residential’s President Rick Elezi and wife and business partner Shpresa Elezi do – their managing agents, the owners and superintendents of the 70 rental buildings they manage throughout predominantly Manhattan, but also Brooklyn and Queens, in their way, the tenants who live there, the R.E.M. extended family is, well, too large to count.
Walk into their spacious new Midtown office, designed in immaculate detail by Rick himself, and you get it right away – a welcoming feeling of attentive close-knit family hospitality. Wide open and expansive, the space in which the team works reflects a staunchly – held R.E.M operating principle: transparency.

“Transparency is very important to us,” says Rick. “We have nothing to hide. Our fees are inclusive and there are no hidden costs and unlike most companies in this industry, we will not take a building on for the extras.”

R.E.M has an in-house listings agent. Tye Moody, the Founder, and Principal of Best Friends Realty handles a number of their rentals. But using his services is always the landlord’s prerogative: “If the landlord wants to use his own people, we’re happy to work with them,” says Rick. R.E.M sees its brokerage arm as a service, not an opportunity to churn out fees. Plus, the company alerts the owner and their broker whenever a tenant indicates they will not renew.

“There is transparency in everything we do here,” he says.

Indeed, Rick encourages his clients to reach out to each other. Not only does open communication offer clients the opportunity to learn from each other, “it keeps us on our toes,” he says. He often invites them to the office to join their staff in meetings on building issues.

Since founding R.E.M. in 2000, the company has grown dramatically, expanding to include 70 buildings throughout Manhattan, and Brooklyn, including properties managed for Noah Osnos, their first client, who is with them to this day. R.E.M. also manages properties for Peter Hauspurg and Daun Paris, Founders of Eastern Consolidated; Earl Altman, Co-Founder of ABS Partners Real Estate; and Kayvan Hakim, President of Carnegie Hill Properties.

In 2012, R.E.M. acquired LWL Associates and its portfolio of 30 buildings in Manhattan, welcoming Paula Rivera, Co-Owner with her mother, of LWL and members of its staff. Rivera now serves as R.E.M.’s Director of Operations. 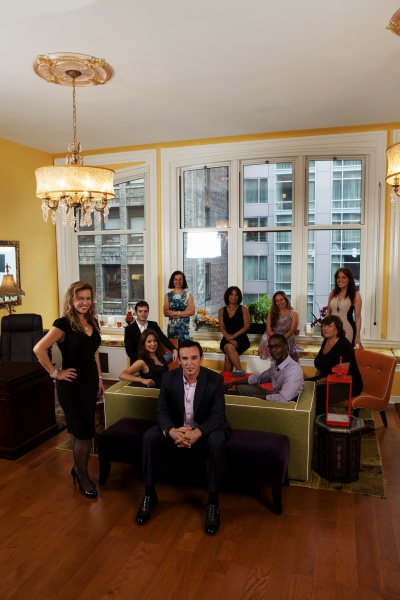 What makes an outstanding management company?

“Our aim is to improve the performance of a building,” says Rick—to run it, and often upgrade and reposition it, to achieve the highest rents possible with minimal vacancies, while operating at maximum efficiency.

To keep operating costs down, says Rick, “we analyze the fuel bills and make sure they are using the best technology.” For example, he says, “putting in a heat timer and a smart control reduces heating expenses by 30-40 percent.”

“We are specialists at turning buildings around,” he adds. “When we took over the management of Noah Osnos’ 17th Street buildings, the rent roll was $600,000. Now it is almost $3 million.”

“We took over a building from a management company that had it for eight years,” recalls Rick, “and that’s how many times the manager went there—once a year. They left everything to the superintendents.” That doesn’t fly at R.E.M.

“We don’t engage in drive-by management,” says Aida Gashi, Director of Tenant Relations. R.E.M.’s managing agents and Rick himself visits their properties constantly. With the Hauspurgs’ buildings, for example, says Rick, “we do weekly walk-throughs of the buildings with Daun. And every two weeks we meet at their office to talk about all building issues.”

R.E.M. uses state-of-the-art technology to stay on top of every aspect of their buildings’ bookkeeping and compliance requirements, using such tools as SiteCompli, which automatically com¬piles data from local government agencies and issues alerts of required inspections and application deadlines. R.E.M. uses Yardi, the most advanced software platform for multifamily accounting and analytics.

But their greatest strength is the constant vigilance of the back-office team, overseen by Rick himself. “We have a process in place to review every rent bill that goes out to make sure there are no errors, to look out for leases expiring or wrong tenants,” he says. “We inspect every check in every envelope that comes in—1,300 checks a month—to watch out for wrong signatures or illegal tenants.”

Managing rental buildings exclusively, as R.E.M. does, keeps Rick working 70 hours a week, but he wouldn’t have it any other way. He thrives on the multitasking and constant action that rental management demands.

“With co-ops and condos,” he explains, “you’re just holding the line; it’s all the same. I like the game of rentals. There’s a lot of strategy involved in getting rents higher and maximizing performance. And when you work with just rentals, you can get to know the tenants.”

“Tenant retention is so important,” says Rick. R.E.M. takes pride in bringing in good market rate tenants through careful screening and then keeping them in place to avoid downtime and the costs of painting and upgrades.

The key to dealing with tenants is respect, attentiveness, and patience. Senior Property Manager Victoria Guzman and Shpresa help set the tone. “I tell the staff,” says Shpresa, “when somebody is calling, they are not calling to tell us how great we are, they are calling to complain about something. So when the phone rings, before you answer, take a deep breath, and as you exhale you say, ‘R.E.M. Residential, good morning, how can I help you?’”

Simple, but it works. “Our tenants are happy with us and they recommend their friends and family,” says Shpresa. “There is very little downtime in most of the buildings. If we have an apartment open, we’ll go through our waiting list. For many of our buildings, we don’t even have to advertise. I just rent from the list.”

Landlords are often stunned with the company’s relationship with their tenants. When the Habsburgs decided to sell one of their buildings and a potential buyer came to the office, recalls Rick, “the buyer was impressed that Victoria knew every name in the building, their age, the history of the apartment—that’s what we do.”

“570 West 204th Street is probably our greatest achievement,” Rick declares. Known in the neighborhood in its early days as “the flower of Inwood,” the building was in terrible disrepair when R.E.M. took it over. “It had drug dealing, garbage in all of the halls, graffiti every night, people hanging out outside,” recalls Rick. “It was totally neglected. We put a new superintendent in place, turned over about 40 apartments, renovated units, put in new electric, new elevator, video surveillance and key fobs.”

Today the building thrives. With 88 units and two doctors’ offices, it has helped re¬vitalize its surrounding neighborhood, attracting young urban professionals. “We don’t even use a broker in that building anymore,” boasts Rick. “People ask us if they have any vacancies.”

Rick’s is the American success story par excellence. Having come to the U.S. with his family from Albania at the age of two, Rick grew up in a poor household in the South Bronx, worked full-time as a doorman and porter from the age of 17 through college, then worked as a managing agent for two property management companies before he struck out on his own, founding R.E.M. at age 35.
As his reputation for honesty and meticulously capable management spread, the company’s portfolio of rental buildings, and his staff grew steadily. At the beginning of this year, he added six new buildings, appointed three new senior executives and moved R.E.M. into its impressive new 5,000-square-foot headquarters at 36 West 37th Street.

Rick’s vision for R.E.M.’s future is clear: to add a roster of large buildings to the portfolio. And if past is prologue, the company’s potential is unlimited. The office and property management staff are capable and ready, and the company recently earned C3P Tax Certification for running 80/20 buildings.

But Rick is committed to expansion of his strict terms—that R.E.M. continues to offer large and small landlords the same level of quality service and, more important, that the company remains true to the principles of honesty, transparency and customer service that have earned it a stellar reputation among building owners in New York City. And, above all, that it keeps that family feeling.